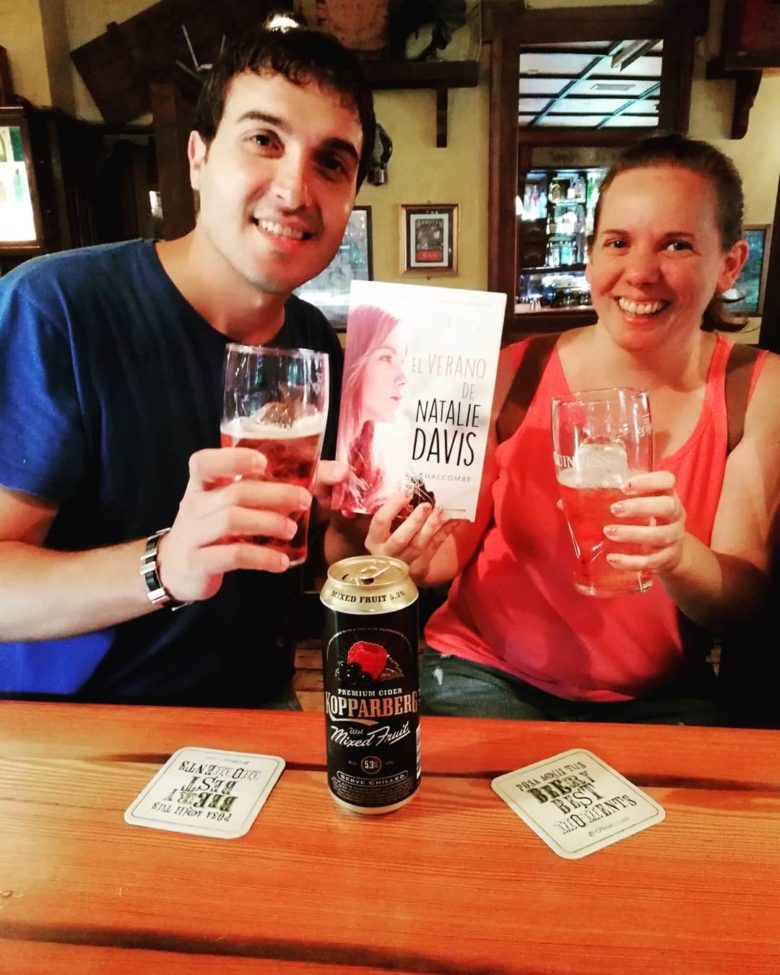 Forget about 1st of September: Let´s focus on the 13th instead!!!

First of all, we ought to talk about the picture you see before talking about September, 13th. I usually drink Irish cider in an Irish pub. This time I did it with a beloved friend who as Halcombe, is a Sign Language Interpreter. What is more, we talked about my fictional novel, and this is something we must remember next September, 13th. This is why:

The 13th of September of this year is going to be important for Halcombe. The answer is very beautiful. This is because my fictional book “El Verano de Natalie Davis” (The summer of Natalie Davis) can garner a prize. In fact, Halcombe has been nominated to win a prize.

One literary editorial organizes literary prizes and has nominated humble authors like me. My book appears in one category and this 13th of September I will travel to Madrid to attend a ceremony. It is going to be exciting. It will be magical if I receive a prize.

I am not going to appear on television, yet it could be amazing insofar as I can meet relevant people so that be closer to my dream. My dream is to see this novel converted into a movie!!

Yet, the 13th of September is also important in my opinion. The reason is an activist but more famous because of her movie career, Cynthia Nixon, can make history. If you remember I published a story about her here no so long ago: Cynthia Nixon

Cynthia Nixon can earn the nomination to run for New York Governor. She can become the first woman, bisexual and Lesbian that is the governor of New York and given her history of success as an activist this can be good news for the world because, what is more, New York is a very progressive state and she may fit perfectly. The other day a debate between Cynthia Nixon and Andrew Cuomo took place. In my opinion, Nixon won, it was a big debate, but Nixon prevailed with sentences like this one:

“Can you stop interrupting me?” Asked Cuomo

“Can you stop lying? Answered Nixon.

This can happen the same day Halcombe can receive a literary prize. But there is something else.

This is not going to be as exciting as my literary prize. This is not as important for the world as the nomination of Cynthia Nixon. However, it might be really funny.

I usually watch with my parents on The Tonight Show with Jimmy Fallon at the weekend as they have cable television. We watch it on Saturdays. The beginning is always very funny, but also is good to remember that one episode of this show helped Halcombe to conceive my novel.

Follow this link to remember this and watch the appearance of model Hannah Davis as Sports Illustrated cover girl. This episode made me start creating my protagonist Natalie Davis.

The thing is this 13th of September they are going to make the show from Central Park in New York. Because of the time change, the show can start once Halcombe has received one prize and Cynthia Nixon is the favorite to win the state of New York as Governor.

This can take place on September, 13th. Let´s forget about the 1st of September. Let´s focus on the 13th instead!!! You know the reason now!!!